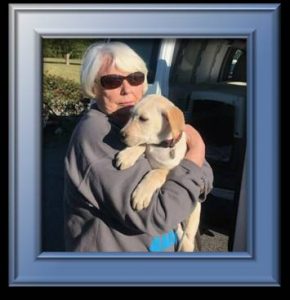 Eleanor is married to her second husband, Jack and they are blessed with five children and 11 grandchildren. Retired from the Philadelphia School system in 2000, Eleanor continued to keep herself busy in Sea Isle City with lots of volunteer work, including Treasurer of the Sea Isle Garden Club, member of the Seal Isle City Environmental Commission (currently involved in the preservation of the Diamondback Terrapin turtles) led an educational Beachcomber Program, as well as Trustee and membership chairman for the Sea Isle Historical Museum. Additionally, she is member of a book club, alter guild at her church, and trying to find free time occasionally to play Mahjong.
Since a young child, Eleanor always had a dog by her side. Now she is the proud Mama to two dogs, both rescue, and one from Georgia!
Eleanor became involved in Animal Aid USA in April of 2016, when she was asked by her daughter to replace a last minute cancellation of a transport team member. Initially concerned, as she was still exhausted from a recent drive from Florida, but she agreed to made her first trip as a caravan team member and has never looked back. Eleanor is mostly impacted by the diverse group of caring people who show compassion and work so hard to save the precious dogs that are unwanted in Georgia. She says she feels humbled and blessed to be a part of Animal Aid USA.