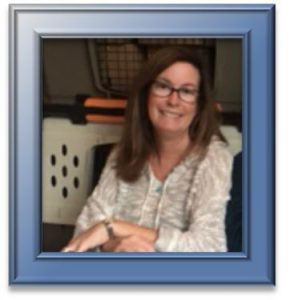 As the owner of several Atlantic City restaurants, she frequently hosts fundraisers. During a fundraiser for Josh Vadell, a ACPD officer who was shot on Labor Day weekend, she purchased a baby stroller from a Atlantic City Police officer. Coincidentally, the officer was a good friend and co- worker of Josh Vadell, and when the officer delivered the stroller, conversation began over Jane’s dog, seen through the door. Jane offered that she was a rescue from a high kill shelter in Georgia. The officer’s dog had the same background, adopted thru Furry Angels, ultimately, Animal Aid USA.

Hearing all about Animal Aid from the officer and Karen prompted Jane to call Karen and the rest is Animal Aid USA history! Jane has volunteered and participated several rescue trips, and has brought her son Jimmy and his girlfriend into the AAUSA family. Jane has helped 15 people adopt their dogs from Georgia and says her life will NEVER be the same, thanks to Karen and Animal Aid.